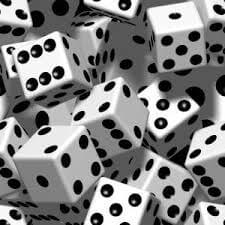 Playing drinking games in a second language can be a recipe for inebriated disaster, but in China, dice games provide the perfect ladder to climb over any language barrier at the bar.  Whether you’re cheers-ing with colleagues from around the world or in a club with the bass bumping so hard you couldn’t even understand your best friend, let alone a native Chinese speaker, dice games provide a great way to bond without the mind-numbing that comes along with socializing in a second language.

The two dice games that are most often played in China (and will serve you best in such occasions) are Liars Dice and One & Six.  Although the titles of these games may vary, the rules are what should be focused on. Even if you don’t remember how to say the name of the game, if you just jump right in, most Chinese people will pick up what you are putting down.

Introduction: Liar’s dice is by far the most popular dice game in almost all cultures. This game can be played with as many players as there are dice to go around and requires focus and strategy. Although the gambling aspect of this game can be stressful, it is also what makes it the most fun. (Warning: Do not begin playing this game without perfecting your poker face. The bluff is probably the only place where a language barrier comes in handy.)

Need: At Least 2 People, 5 die per person and 1 cup per person

Objective: You want to be the last person in the game with any amount of die in your cup.

-Each round consists of a dice shake up and a cup flip.

-When you flip your cup only open it up enough for yourself to see what kind of hand you rolled at first.

–Important Note: the number one is a wildcard and can count as any number.

-When the first person speaks, they use the dice they have to estimate how many of a certain number there will be amongst all of the players dice.

For example the first player will start out by saying: There are eight threes amongst all of us (including the 1’s in their calculation, which would count as threes).

-Then when it’s the next person’s turn they are allowed to do one of the following:

a. Call that person’s bluff

b. Up the ante by saying that they believe there are one or higher of that same number amongst all of them. For example: There are nine threes amongst all of us.

c. Up the ante by saying that they believe there are either the same amount or higher of a number that is higher than the original number being estimated about. For example: there are eight fours amongst all of us.

-The estimations will carry on and increase in one number or another until eventually someone is forced to call someone’s bluff.

-In the case of calling someone’s bluff, everyone must open their cups and put the dice that are relevant to the last guess on top of their upside down cup (so if the last call was eight fours, each player must put all their fours and ones on top of their upside down cup).If there are in fact less than what the player estimated of that certain number then they will lose a die. However, if they are equal to or more of the number (including ones) that the player estimated then the person calling the bluff would lose a die.

– After someone loses a die a new round is begun and people must adjust their estimates based on the new odds with the lost die accounted for.

-When one loses all of their die then they are out of the game.

-The final two people in the game will battle it out until one of them is the only person left with any number of die in their cup.

To make this into a drinking game: Instead of making the person who guesses wrong lose a dice, have them take a drink.  By playing this way the odds will remain the same but the more drinking that occurs will only lead to a snowball effect of bad guesses and more drinking.

-Always account for the number of dice left in the game, do not make estimations based on the original number because odds dwindle fast.

-Attempt to make a guess that is high enough to force one of your competitors to call another competitor’s bluff before it is your turn to guess again. The later you guess in a round the more likely you will be to fail.

-Don’t forget about the ones!! They can be your best friend and worst enemy in any round. Make sure they are accounted for!

– This game is particularly easy in loud clubs as you can just use your hands to show “eight fours”. Learning how to count to ten with one hand in Chinese is important here, so learn the hand signals here.

Introduction: One & Six is a dice game that involves absolutely no strategy and at least two people with five die each. This game is the most simple to play in social situations because not only does it involve zero focus but it also clearly decides a winner.

Objective: Be the first person without any dice in your cup.

-Each round consists of a dice shake up and a cup flip.

-When you flip your cup, flip it downwards and pry it open to reveal what numbers you rolled.

-If you role a one, remove that die from your cup and put it out of bounds. That die has been lost from the game. Continue rolling with the remaining dice.

-If you role a six, remove that die from your cup and give it to the person on your right.

-If you role neither a six nor a one then wait to see what your opposition rolled and do nothing.

-Continue shaking and flipping the remaining dice until one of you has no die left in your cup.

To make this into a drinking game: Whoever runs out of dice last must drink for the number of seconds that there are dice left in their cup.

Strategy: None besides being Irish.