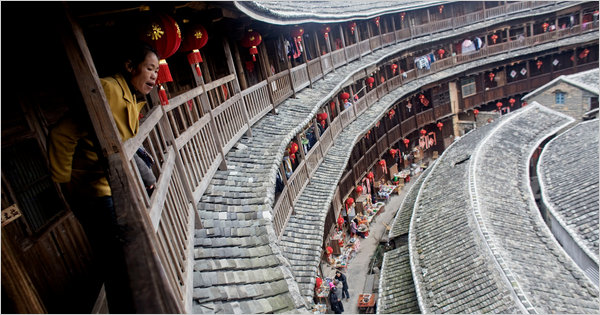 It’s not Shanghai, but it’s an interesting side trip if you’ll be traveling to the Chinese beach city of Xiamen. But according to the NYT, their numbers are dwindling, and the government isn’t doing enough to protect the structures, which look something like a UFO.

But the thousands of “earthen buildings” here, built by the ethnic Hakka and Minnan people of rural Fujian Province, are the ultimate architectural expression of clan existence in China.

For centuries, each building, called a tulou in Mandarin Chinese, would house an entire clan, virtually a village. Everyone living inside would have the same surname, except for those who had married into the clan. The tulou usually tower four floors and have up to hundreds of rooms that open out onto a vast central courtyard, like the Colosseum.

The outer walls, made of rammed earth, protected against bandits. The forms vary. Many are square, resembling medieval keeps. With stockpiles of food, people could live for months without setting foot outside the tulou.

But as the clan traditions of China dwindle today, more and more people are moving out of the tulou to live in modern apartments with conveniences absent from the earthen buildings — indoor toilets, for example.

The whole read is interesting, but sad to hear that there are only maybe 3,000 left in the province today, and of course, the younger generation doesn’t have much of an interest in living there any more.

If you’re looking for cheap flights from within China, a safe bet is always Ctrip, with much lower rates then most international search engine aggregators. Happy travels!