Mid-Autumn Festival (中秋节, zhōngqiūjié) lands on the 15th day of the eighth lunar month, relatively near the autumnal equinox; in 2018, it falls on September 24. Also sometimes called Mooncake Festival, it’s a public holiday in China on which families gather to give offerings to the full moon, float sky lanterns and eat mooncakes (月饼, yuèbing).

A culinary tradition with legendary roots, mooncakes are sold everywhere from grocery stores to to Starbucks to five-star hotels and come with competing origin stories that relate how these sweets came to represent the holiday.

Mid-Autumn Festival was inspired by the mythical story of Chang’e, the “Lady of the Moon.” Once upon a time, the world had 10 suns, all of which lived in a mulberry bush together, and each day one sun would be drawn around the world in a carriage. But one day, all 10 suns took to the sky, and their heat destroyed the crops and set the earth on fire. To save the world, the archer Houyi shot nine of the suns down, and the emperor rewarded him with an immortality pill.

The legends differ on how Houyi’s wife, Chang’e, got the pill and consumed it, but one thing is certain: It made her fly. Houyi tried to chase her but was turned back by blustery winds. By then, Chang’e had landed on the moon, where she remains to this very day. By some trick of the gods, Houyi has found his own place in the sun, and each year on Mid-Autumn Festival, the husband and wife are reunited and the moon glows its brightest. Offerings to the moon and Chang’e are required that day, and over time the most

popular contribution became the round mooncakes that reflect the beauty of the moon.

Other tales of how the mooncake became associated with Mid-Autumn Festival hearken back to the Yuan Dynasty (1271–1368). During this dynasty, the “barbarian” Mongolian leaders did not like the taste of mooncakes. So the military counselor of the Han people’s army, Liu Bowen, decided to furtively communicate with the people via the little sweets. To encourage people to eat them, he declared that the desserts held a medicine that would prevent the spread of a deadly plague. Bakers hid secret missives inside the round delicacies instructing the Chinese to overthrow the barbarians on Mid-Autumn Festival. The uprising was a success, and the Ming Dynasty ruled the land for the next 300 years.

Traditionally, the thin crust surrounds a rich filling, such as lotus-seed paste; other popular flavors include red bean paste and date paste. The pastes can take up to two weeks to prepare. Most families purchase their mooncakes at bakeries instead of making them at home. The baked centers include salted egg yolks – to represent the moon, and mooncake molds bear each baker’s insignia.

As the custom is brought into the 21st century, mooncakes are often given as gifts to family members and business associates. It’s not unusual to receive many more boxes than one could possibly eat. The custom of gifting (and regifting) sumptuous boxes of lavishly flavored mooncakes has become an essential part of doing business in China. Think of it like Christmas fruitcake traditions.

In modern times, variations on the filling have multiplied as gifting becomes more commonplace. Even international companies have gotten in on the lucrative action. Starbucks has previously released coffee and pumpkin latte varieties, and Häagen-Dazs serves ice cream options. Five-star hotels go for extravagance, stuffing their mooncakes with abalone, shark fin, truffles or foie gras. Packaging has also become an essential aspect of the custom, with merchants offering everything from commemorative mooncake boxes that turn into wine carrying cases to feng shui-inspired cakes that come with iPhone cases and headsets for large orders.

While Mid-Autumn Festival is a time for family, it’s also an auspicious date for love. It’s common to see couples tying the knot around the date. Mooncakes have even become a vehicle for romance. Hopeful grooms special-order cakes stuffed with a diamond ring and occasionally pure gold.

But fair warning, these tiny sweets pack a hefty punch, with 800 calories per cake on average. That makes them one of the densest foods Chinese people consume. Shops churn out low-sugar (or even no-sugar) mooncakes, but eat in moderation. Pairing them with bitter teas, like pu’er, helps cut the sugar and oil. Or you can just try the time-honored diet trick of sharing. Families used to slice them into eight pieces to divide up the luck (and the calories) in the days before mooncake trading became an autumn pastime to grease palms and improve guanxi

Where to buy mooncakes in Shanghai:

Xing Hua Lou – 杏花楼
With almost a century of mooncake-making under their belts, Xing Hua Lou’s many locations are Shanghai’s top destinations during Mid-Autumn Festival. They’re so popular that scalpers sit outside the branches hawking counterfeit boxes bearing the store logo. This Cantonese restaurant originally opened in 1851 but didn’t start baking the holiday sweets until 1928. The menu has evolved into 20 flavors over the years, including the old standby: sweet lotus paste

Zhen Lao Da Fang – 真老大房
One of Shanghai’s most famous pastry shops, Zhen Lao Da Fang has been serving Suzhou-style pork-stuffed pastries since 1899. The puffed buns have no fancy baker’s logo mold (merely a red stamp added later with food coloring). They sell for less than RMB 5 per cake, but they are a brand to reckon with all the same. Just check out the line down the block as the weather starts to cool. The Shanghainese will tell you to eat these savory sweets while still warm! 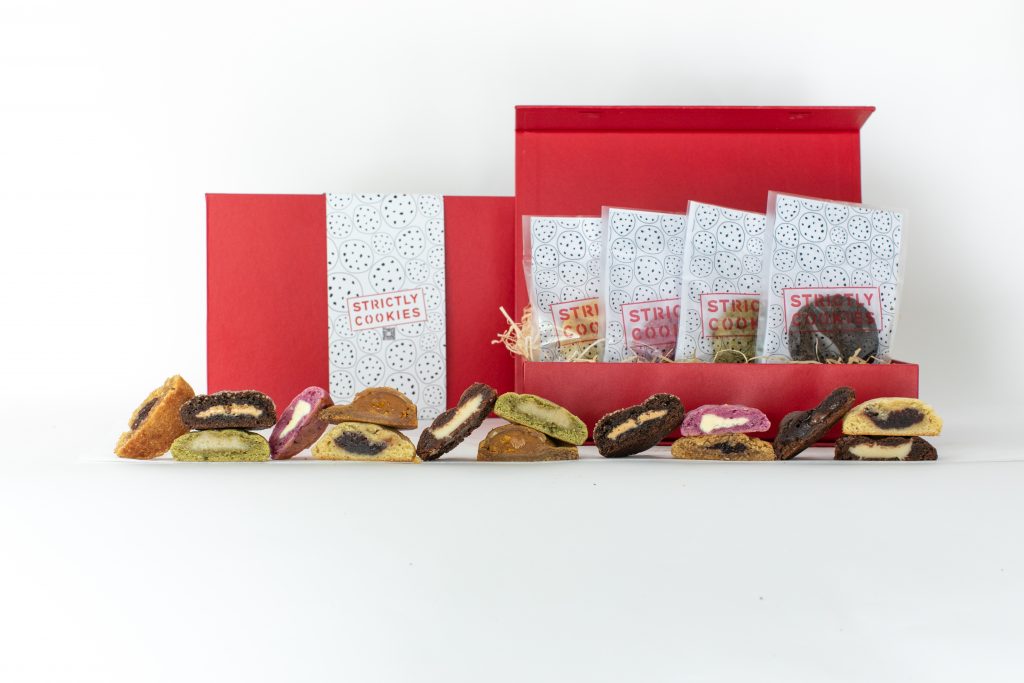 Strictly Cookies
Strictly Cookies offers mooncake-cookies, or “mookies,” available for delivery or at their shop. Presented in a traditional red box, there are eight mouthwatering varieties. Try chocolate chip stuffed with a brownie and purple potato with white chocolate. In a nod to tradition and local flavors, they also sell a plain sugar cookie piped with red bean paste and a salted butterscotch with duck egg filling.

Where to buy mooncakes in Beijing:

Bai Nian Yi Li – 百年义利
This Beijing ‘time-honored brand’ (老字号）has been bringing baked goods and snacks to local residents since 1906. They do a brisk business specializing mostly in fresh mooncakes as opposed to individually wrapped cakes or fancy gift boxes. These areperfect for grabbing a few to eat right away.

Dao Xiang Cun
Most Beijingers contend that this local bakery is the most famous one in the city. Established in 1895, DXC now has hundreds of locations. Stop in for a wide variety of sweets, an mix and match individually wrapped mooncakes.