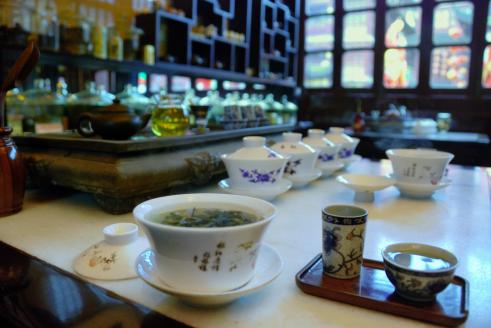 The leaves used to make all types of tea come from the same plant, Camellia sinensis.After being harvested, the leaves are then processed and oxidised to create so many different types of the beverage that one ancient adage notes “You can study tea all of your life and still not learn the names of all the different kinds.” For those who don’t want to dedicate a lifetime to tea, there are four major types that can provide enough tea drinking information to sate the thirst of any amateur.

Green tea leaves are only picked in the spring, and contain the youngest buds and tips picked from the top of the plant. Green tea picking season lasts for just a month, and the price of the tea picked goes down with each subsequent day, with leaves picked on the first day easily fetching hundreds (and sometimes thousands) of dollars at the market.

Processing: After picking the new buds, the tea leaves are steamed to stop the oxidisation process that occurs from the natural enzymes in the leaves, then “fired”, which can either mean pan-fried in a wok or dried with hot air.

Serving: Green tea is very delicate, so boiling water should be allowed to cool to 70°C before being added to the leaves. Glass or ceramic tea ware is best used with green tea.

White tea is the most precious variety of tea as it is made from adolescent tea leaves whose buds have not yet opened. This tea takes its name from the silver hairs that cover the leaves and turn white after being picked. White tea can only be picked over a two-day period in early spring.

Processing: White tea undergoes even less processing than green tea. The leaves are merely steamed to stop the oxidisation process.

Serving: Like green tea, delicate white tea should be served with boiling water that has been cooled for several minutes. Glass or ceramic tea ware is best used with white tea.

Health Benefits: Studies on white tea are limited, but scientists believe that since white tea undergoes less processing, its health benefits are even greater than green tea’s.

Oolong or ‘Black Dragon’ tea originated in Fujian province, and is considered a blue tea because its properties fall in between green and red teas.

Processing: Oolong teas are partially oxidised (from 15 to 75 per cent) before being heated in a tumbler of hot air until the moisture level is satisfactory. The arduous process can last up to 36 hours and gives the tea its nickname of gongfu cha (or kung fu tea) for the hard labour and dedication the brewing process requires.

Serving: Oolong teas are much hardier than green and white tea and can be served with water that is near boiling point. Porcelain tea ware should be used with oolong tea.

Health Benefits: Oolong tea has been attributed with weight loss properties, but is also used to aid digestion and cleanse the body.

While the Chinese call the colour of this particular tea ‘red’, in the West it is commonly referred to as black tea. The most famous black tea is pu’er, which originated in Yunnan province and migrated to the coasts along the Tea Horse Trail. The trek required the tea to come packed in compressed cakes. While green tea loses its flavour within a year, black tea retains its taste for decades.

Processing: Black tea’s leaves are fully oxidised – often for upwards of two months – for a drink that is full of flavour.

Serving: Black tea can withstand near boiling temperatures. Serve black tea in a clay pot (known as zisha yixing) that absorbs the flavours and re-releases them into the tea over the years of brewing.

This was originally written by Jamie for the January 2011 edition of Shanghai TALK. If you’re interested in learning more about the ancient art of tea, join UnTour for our special Tea Service. You’ll learn the complex process of brewing tea at one of Shanghai’s most authentic teahouses and tour the best-stocked tea wholesale warehouses for great deals.